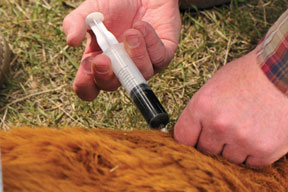 These cattle are eating more than grain — antibiotics are routinely part of their feed.

Animals in factory farms get daily doses of antibiotics, both to keep them alive in their stressful, unsanitary conditions and to make them grow faster. What’s the annual volume of antibiotic use on factory farms? The question is a critical one, because the practice has given rise to a novel strain of antibiotic-resistant staph (MRSA), known as ST398, that’s widely present in our vast hog and chicken factories.

Well, federal regulators have for years ignored the question and refused to release estimates of just how much antibiotics the livestock industry burns through. But that ended yesterday, when the FDA released its first-ever report on the topic. The answer: 29 million pounds in 2009. According to ace public-health reporter Maryn McKenna, that’s a shitload. (I’m paraphrasing her.)

McKenna, author of the important book Superbug: The Fatal Menace of MRSA and once a guest on my podcast show, puts it into context on her blog. She says that in lieu of official accounting of antibiotic use in industrial agriculture, NGOs have tried to fill the void. In 2000, she reports, the Animal Health Institute, a veterinary-drug trade group, estimated total use in livestock at 17.8 million pounds. The industry has been clinging to that number ever since.

Meanwhile, the Union of Concerned Scientists, which campaigns against industrial agriculture, put the figure at 24.6 million pounds in a 2001 study. But the UCS figure focused only on “non-therapeutic purposes” — i.e., in McKenna’s words, applications not designed to treat specific illnesses but rather to “make animals grow to market weight faster and to prevent them catching diseases in the close quarters of confinement agriculture.” UCS figured the industry used another several million pounds for legit purposes of treating sick animals.

Assuming that factory farmers haven’t dramatically ramped up antibiotic use over the past decade, the industry figure is woefully off — about 40 percent lower than the real one. And the UCS estimate holds up well. I took another look at that classic UCS report, called “Hogging It: Estimates of Antimicrobial Abuse in Livestock.” In it, the group estimates that total U.S. antibiotic production stands at 50 million pounds. Assuming that’s roughly still correct — again, the paper came out in 2001 — that means factory animal farms hog a stunning 60 percent of U.S. antibiotics.

Importantly, McKenna says the FDA’s report dovetails with the agency’s “new effort to curb antibiotic use in agriculture.” The first step to that effort, of course, is scrutiny and transparency. Margaret Hamburg’s FDA deserves praise for finally delivering an accounting of how our animals factories are gulping antibiotics.

For a reminder of what’s at stake, see McKenna’s blog post from today, called “Pig MRSA: New Human Infections in France.” She first sets up the context:

Recapping, this is a strain known as MRSA ST398 that emerged in pigs and passed to pig farmers in the Netherlands in 2004, subsequently spread across the European Union, and crossed to Canada and then to the United States. (Key posts on ST398: here, here, here and this archive at my old site.)

She then points to a recent study of four new cases of the pig strain of MRSA among hospital patients in France — three of whom had no direct contact with hog farms, suggesting that pig MRSA is making its way off the farm.

The livestock industry would want us to believe that such cases are isolated accidents. McKenna is not convinced:

The argument against the significance of these cases is likely to be that they are, again, just one data-point, and may be just rare and random. That is worth considering. But it is also worth considering that they continue to be found. And, also, that the community epidemic of MRSA was first flagged in a discovery of 25 cases in children in Chicago back in 1998, a finding that was also dismissed at the time as rare and random — and that grew into an epidemic of millions of cases a year.

Previous: Variety is the way to go, mix it up
Next: Carrots and Dogs